Well, I think it’s that time again. Time for a new National Park-related list.  I previously made lists of my Top 10 Favorite National Parks and Top 10 Short and Long National Park hikes.  I’ve also shared my Bucket List and a list of places I’ve visited that I think should be on everyone’s Bucket List.  This time, I decided to go with a list of my Top 10 Wildlife Encounters.  They all occurred in National Parks; unsurprisingly most of them were in Glacier and Yellowstone.  Almost all of these were up close and personal interactions, while a couple could be better classified as “wildlife sightings” from afar.  I decided I would simply use a photo of the park of the incident as my Featured Image, so that I don’t give away the type of wildlife.  Hope you enjoy my list.

9. The rattlesnake on the way up Half Dome

Location: Less than a half-mile from the trailhead on the Highline Trail, which is at Logan Pass in Glacier National Park.

Rarity (the first of a few totally subjective 1-10 scales I am using): 9 – mountain goat sightings are common in Glacier, but a one-horned mountain goat?  That’s got to be pretty unusual.

Fear Factor: 4 – Ashley and I were quite scared for a second, because we thought we heard a bear coming through the trees, but we weren’t worried once we realized it was a mountain goat.

Description: Ashley and I just arrived in Glacier National Park following a few days in the Canadian Rockies. I wanted to get her right on a trail, so we headed up Going-to-the-Sun Road to Logan Pass and walked to the trailhead for the Highline Trail.

It was late afternoon when we began, so I just wanted to fit in a short hike to introduce Ashley to my favorite National Park. I had actually hiked portions of the trail on both of my previous trips to Glacier.  I hoped we would see some wildlife on the trail, just as I had on both my previous hikes.  The Highline Trail did not disappoint.

We passed through a meadow interspersed with pine trees before getting to the steep ledge section. We carefully traversed the narrow pathway while clinging to a hose attached to the mountain.  Once we made it to stable ground we carried on through the Garden Wall portion of the hike for another fifteen minutes or so.  We started to get cold and hungry, so we turned back.

We got back across the ledge and were halfway through the meadow near the trailhead when we were startled by a noise. It sounded like something big was moving through the trees beside us.  We feared it was a grizzly bear, but we were quickly relieved to find that we were actually alarmed by a silly-looking mountain goat. 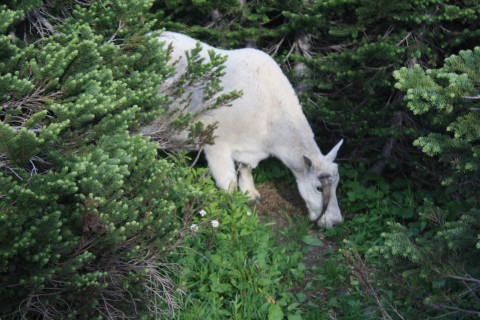 This mountain goat that stood just a few feet from us was calmly grazing between some trees. Its fur was a pure snowy white, but the poor thing had only one horn.  The horn that it did have looked like it was barely hanging on.  Yet, the animal looked peaceful and very unthreatening.  It didn’t appear to be in pain.  Mountain goats don’t shed their horns, so I don’t know what could have happened to it.  We took a few photos and then continued to the trailhead.