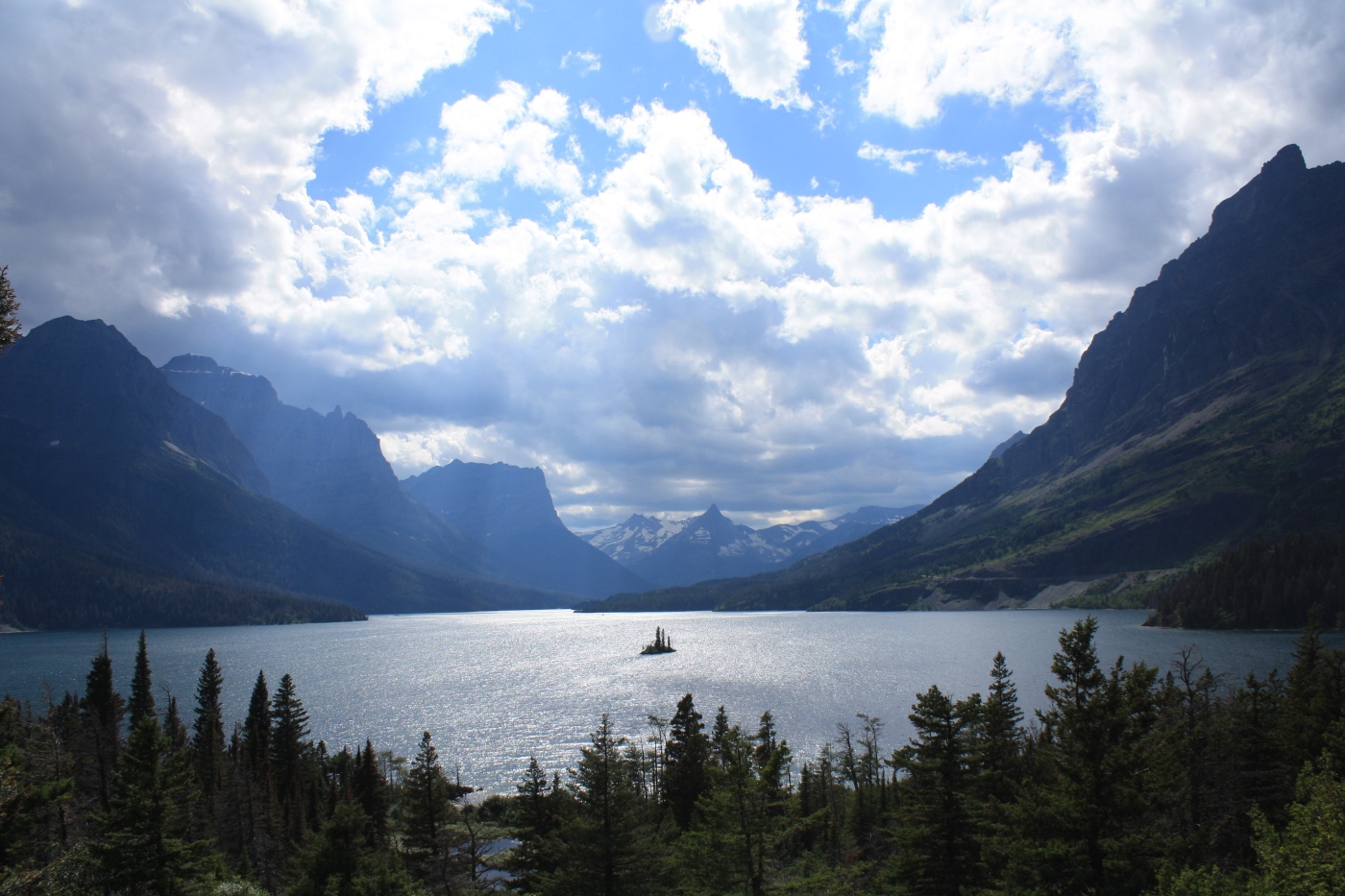 Well, I think it’s that time again. Time for a new National Park-related list.  I previously made lists of my Top 10 Favorite National Parks and Top 10 Short and Long National Park hikes.  I’ve also shared my Bucket List and a list of places I’ve visited that I think should be on everyone’s Bucket List.  This time, I decided to go with a list of my Top 10 Wildlife Encounters.  They all occurred in National Parks; unsurprisingly most of them were in Glacier and Yellowstone.  Almost all of these were up close and personal interactions, while a couple could be better classified as “wildlife sightings” from afar.  I decided I would simply use a photo of the park of the incident as my Featured Image, so that I don’t give away the type of wildlife.  Hope you enjoy my list.

9. The rattlesnake on the way up Half Dome

6. The many mountain goats along the Hidden Lake Trail

3. Face-to-face with a massive bison

2. The ram hiking the Highline Trail

Rarity (the first of a few totally subjective 1-10 scales I am using):  9 – Grizzly bears and moose can both be spotted in Glacier, although neither is especially common.  Spotting the two interacting with each other made for a memory of a lifetime.

Wow Factor:  10 – This is number one on my list, so it was obviously an incredible thing to watch.

Danger: 7 – I was high above the bears and moose at the time I watched them, so I wasn’t worried then.  However, knowing there were grizzlies in the area put me on high alert when hiking through that same area later on.  The trail was also closed due to grizzly activity before I returned to the trailhead.

Fear Factor:  6 – Like I said, I was on high alert for a short time.  I made more noise than usual and was very observant, but I never feared for my life.

Description:  This sighting actually came on the same trip as my number two wildlife encounter on this list.  Joe and I were hiking up the Grinnell Glacier Trail, which is probably my favorite hike in the whole National Park System.  It is filled with amazing views and wildlife, too.

We passed by Swiftcurrent Lake and Lake Josephine and then ascended the trail up the side of the valley toward Grinnell Glacier.  We paused part way up the side of the mountain to admire the beautiful valley below us.  There were great views of the two lakes we had passed and a dense forest of pines beside them.  We could see the small, but spirited Cataract Creek which meandered its way between Lake Josephine and Grinnell Lake (which was still out of view).  Looking down, we saw a wooden bridge spanned one section of the creek.

The timing of our break was flawless; as we were about to witness an unforgettable scene.  Joe first spotted a bear emerge from the woods on our side of the creek.  We could tell it was a grizzly by the hump above its shoulders.  The bear stopped next to the wooden bridge and then a small cub sauntered up behind it.  We were a safe distance away, standing on the trail a couple hundred feet above the creek and also a few hundred feet north of the bears.  I watched them through the telephoto lens on my camera, but they were so far away that the photos came out blurry.

Once the grizzly bears got to the edge of the creek they jumped into the water.  The mother did a belly flop, which was immediately followed by its cub.  We watched them land in the water, then swim a few feet before walking up the far end of the creek.  Next they hurried south beside Cataract Creek, with the cub trailing its mother by about twenty feet.  In less than a minute they disappeared from view inside the dark forest that shrouded the creek. 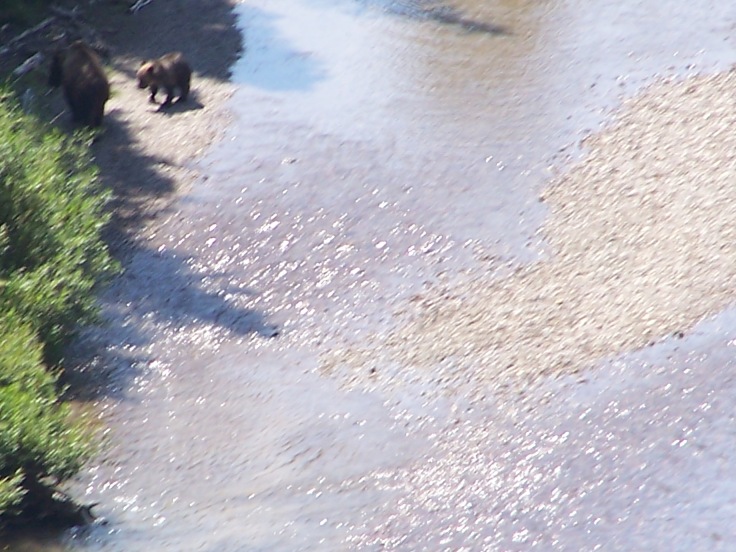 The sight of the grizzlies in their natural habitat, albeit brief, was incredible.  We thought the show was over, but thankfully a short encore would follow.  We were still in a slight state of shock when we saw an enormous bull moose charge out of the forest from the same spot the two bears first appeared.  We were far away, but there was no denying the huge moose was on a mission.  It burst through the water with ease before galloping up the side of the creek after the cub.

We couldn’t believe the moose was actually chasing two grizzly bears, but that certainly appeared to be what was happening.  I’ve seen some moose in the wild before, but have never seen one move so fast and deliberate.  This moose was out for blood.  I thought that since the moose was a little farther behind the bears maybe it had only seen the cub and didn’t realize it was traveling with its mother.  Based on what happened next I’m pretty sure I was right.

The moose followed the creek out of view, just as the grizzles had a minute earlier.  And then, about ten seconds later, the moose reemerged.  As fast as it ran before, it had to be moving twice as quickly now.  The huge beast sprinted beside the far edge of the creek until it vanished into the woods near Lake Josephine.  The bears did not follow.  I wish I could have seen what happened when the moose met up with the mother grizzly, but we had to settle for the entertaining aftermath.