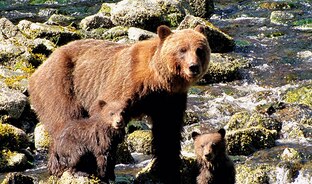 Like most people that love to travel I have a Travel Bucket List. I’ve traveled to a lot of incredible places so far (and written about many of those adventures). I’ve visited Rome and the French Riviera, 23 different National Parks, the Bahamas, Disney World, and several Caribbean islands. I’ve been to a lot of truly awesome places, but there are many more that I would love to visit in the future. There’s Hawaii, Mount Rainier, the Redwoods, Cascades, Norway’s fjords, Switzerland, and England to name a few. I’m sure all of those places would be amazing, but there is one place on my Travel Bucket List that towers above all else. That’s Alaska.

I have wanted to visit Alaska for a long time, but honestly I didn’t think I would actually make it there until much later in life. Thankfully that’s no longer the case. My wife and I have an Alaska cruise booked for next summer. My wife actually booked the trip a couple of months ago, but we’ve made changes which should improve our time in Alaska. Ashley initially booked the cruise for us and our children, because we always travel with our kids. They’re only four and six years old, but both have been on multiple cruises with us already. Our kids have enjoyed cruising and we have a great time sailing with them, but admittedly those trips could never be classified as relaxing vacations. That’s quite alright, but with our upcoming Alaskan adventure we’re looking for something a little different.

Ashley’s mom said she would be happy to stay at our house with our kids and dog so that we can go to Alaska on our own. We went back and forth a little because we have never been away from our kids for more than two days. Factoring in the long travel days across the country helped us decide to accept my mother-in-law’s offer.

My wife then rebooked with Royal Caribbean. We took the kids off our reservation, changed ships and dates. Since we are saving money on the cruise and flights without the kids coming we decided to switch to a newer and nicer ship, Royal Caribbean’s Ovation of the Seas. Now our flights are actually cheaper, too, because we are going to sail out of Seattle instead of Vancouver. As an added bonus, a couple of our friends booked the same cruise.

The cruise is approximately ten months away, but I am still super excited. I’ve watched YouTube videos about the ship and have been doing research about cruising in Alaska and different shore excursions that are offered. I’m guessing we probably won’t be back to Alaska for a while, so I hope we will be able to enjoy some memorable excursions in port. I’ve been on several cruises, but I think I’ve only been on two shore excursions through the cruise. Those were a tour of the Vatican and Coliseum in Rome and exploring the baths in Virgin Gorda. Both excursions were incredible. Like I said before, though, our kids have been with us on every cruise we’ve taken since we’ve had kids, so we haven’t booked any excursions with them. The other thing is that excursions are typically very expensive to book through the ship. That doesn’t mean you should never do them, though.

Since we are actually going to Alaska and we’ll be there without kids I think we really should take advantage of the shore excursions offered through the ship. The big problem is deciding what excursions to take. Ashley and I have already decided one thing we want to do; the White Pass Scenic Railway tour in Skagway. It’s a scenic train ride through a breathtaking mountain landscape. I’ve seen videos and photos and it looks awesome. I can’t wait to ride along and take photos of the scenery around us. I find train rides on their own to be relaxing and fun, so I expect a scenic train ride through the Alaska wilderness to be beyond amazing.

Besides Skagway we are going to be stopping in Juneau, Alaska and Victoria, British Columbia. We should also see some incredible scenery from the cruise ship as we sail through the Alaska Inside Passage and later sail past the Endicott Arm and Dawes Glacier.

We have plenty of time to decide what we want to do in Juneau and Victoria. I’ve looked over some of the options in Juneau and there are a lot to choose from. Like I wrote earlier, I’d like for us to enjoy some memorable excursions on this trip. The problem is most of those things that we think would be really cool and likely very memorable are also extremely expensive. I guess that shouldn’t come as a surprise. At first, we thought dog sledding would be awesome. But at a few hundred bucks per person, we’re probably going to hold off on that one. The same goes for flight-seeing trips on helicopters and small planes (although Ashley and I also aren’t sure if we’d be comfortable flying in either of those anyway). I’d love to see some Alaskan brown bears (from a distance), but those tours require the aforementioned flights and a lot of money. Whale watching boat rides could also be enjoyable, but we’re afraid of getting seasick on small boats. That rules out a few of the more exciting excursion options.

Ashley mentioned zip-lining as a possibility. I’ve never done it and am not sure if I’d like it, but I won’t rule it out. There are kayaking excursions, where you can paddle out into some frigid bodies of water and approach ice bergs and glaciers. That sounds pretty cool to me, but I’m not sure if Ashley would love it.

I have found two excursions that I think may land in the middle of things we each want to do. There are a couple of different excursions to the Mendenhall Glacier. There are some different hiking options that include views of waterfalls, spectacular mountain scenery, and the namesake glacier. That all sounds right up my alley. Another option is the Mount Roberts Tramway, which sounds easy, cheap, and appealing. There is a tram (like a large ski lift) adjacent to the pier, that will sweep you up the side of a mountain to a recreational mountaintop hub (at least that’s what it sounds like). I guess there’s at least a restaurant and some hiking trails up there.

Those are several of the options just found in Juneau. There are also multiple possibilities in Victoria. I can’t say there as many appealing options as in Juneau, but there a few things to consider. Ashley’s parents took an Alaskan cruise a few years ago and they took an excursion to the Butchart Gardens, which they said was awesome. There are also whale watching tours and zip-lining excursions. I’m near certain we will embark on different excursions at each of our

Alaskan ports, but I’d say there’s a chance we could just walk around and not book an expensive excursion in Victoria. Time will tell.

Please let me know if you have been on an Alaskan cruise and can recommend any types of excursions. I’m really interested to hear any type of information (good or bad) on those Alaskan ports I’ll be visiting (and Victoria). I am sure I’ll be doing a ton more research on Alaska before we leave, but I think firsthand knowledge from people who have been there is priceless.

* All photos are taken from RoyalCaribbean.com

11 thoughts on “My dream vacation is booked!”