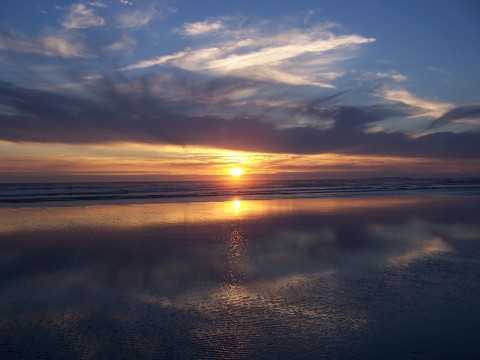 I made campsite reservations months in advance and lucked out with a phenomenal site in Olympic National Park. Joe was with me again at this park, the second last National Park of our 37-day journey.  We made the four-hour drive west from Seattle straight to Kalaloch Campground on the pacific coast.

Kalaloch Campground consists of over 160 sites within walking distance of Kalaloch Beach, which gracefully hugs the Pacific coast.  The campground loops connect to paths that lead down to the beach.  Kalaloch Beach is a natural haven on a stretch of wild and pristine coastline.

Before we made our way to the beach we first set up our campsite.  We assembled the tent and organized our area.  We had become very efficient at setting up camp by then, since it was our sixth time doing so in about three weeks.  After a few minutes we had the tent up with sleeping bags and pillows inside and chairs beside the campfire ring.

Once our site was all set we figured it was time to check out the beach.  We walked along the campground circle, passed a couple of sites, and then found a path entering the forest.  The short trail wound its way around tall dark trees and thick green bushes.  Within minutes we exited the woods and were at the edge of the beach.

However, a great obstacle lay between us and the sandy beach.  There was a pile of driftwood spanning nearly 100 feet.  These were mammoth logs, not just tiny trees.  The logs had been swept onto the beach by the swirling rough waters of the Pacific Ocean.  The powerful water bleached the logs white and sliced off their branches and limbs leaving the logs round and smooth.

After several minutes we successfully crossed over the driftwood gauntlet.  It took a lot of concentration and care to make it across the tangled logs.  We could have easily slipped or fallen and twisted an ankle or worse.  It turns out there were areas where stairs and steps descended to the beach, but it would have taken a much longer walk so we were happy to tackle the driftwood route to the Oceanside paradise.

We took off our sandals and sunk our bare feet into the cool soft sand.  The beach reached a short distance to the water, less than 100 yards.  But it stretched out far to our left and right.  It was a long and thin beach, half covered by driftwood in some areas.  There were barely any rocks on the beach, just miles of soft sand underfoot.

The Pacific Ocean bordering the beach spanned the horizon.  It reached out as far as I could see and then continued on much, much farther.  The water was a blue-gray color, mirroring the sky above.  I walked out to the water’s edge and reached in a hand to check the temperature.  It was cold, certainly too cold to swim in, but I decided to take a couple of steps out into the water so that I could at least say I stood in the ocean.

I turned and looked back up at the forest from which we came.  The trees atop the bluff were permanently windswept and scoured from the powerful squalls that sweep off the ocean and over the beach.  They became distorted over years of suffering, making almost all of the branches and leaves move to the eastern side of the tree, fanning outward at the top.  It was as if the treetops formed arrows pointing to the ocean.

There were some people on the beach, but not many.  Most were walking along the shore and there were some families with children playing in the sand.  Between the rather remote location and the cold water, this was not popular for sunbathing or swimming.  The air temperature at the time was cool too, so I’m sure that factored in as well.

At one point I strolled past the remnants of a bonfire from the night before.  Smoke continued to seep out from a pile of charred wood and ash like the aftermath of a volcano’s eruption.  After walking around on the beach for an hour or so we decided to head back to camp for a bit where we would relax and cook dinner.  We made plans to return to the beach in the evening to watch the sunset on the ocean.  Because of our location we would be among the last people in the country to lay eyes on the sun.

It was about 7:30 p.m. when we made our way back to the beach.  This time we came equipped to stay a while.  We brought our foldup camp chairs, books, water, pretzels, cameras, and Joe brought his trusty guitar.  I walked the shore with my camera and Joe played his guitar as the sun neared its demise at the horizon.  The closer the sun got to disappearing into the ocean, the colder it got.  The temperature dropped to the mid-40s, likely the coldest night of our trip.  It felt even colder, because of a steady wind and the falling darkness.  We were both in jeans and hooded sweatshirts, but we should have had knitted hats and gloves, too.  It became too cold to do anything but munch on pretzels.

I braved the cool temperatures and walked up near the water for some sunset pictures.  The wind formed light contours along the shore.  They were like curved stripes in the soft sand.  The wet sand at the ocean’s edge was an extension of the water, reflecting the bright orange sun just before it fell behind the horizon.  The surrounding sky lit up in divine color for a tiny window of time.  The part of the sky closest to the sun turned orange, above it a long violet cloud stretched diagonally across the sky.  Farther up, the sky remained surprisingly normal, appearing royal blue and sprinkled with white stringy clouds.  And the entire sky ranging from the bright orange ball of the sun to the white clouds far above, reflected flawlessly in the lightly rippled waters of the Pacific Ocean.

Watching the stunning sunset instantly put me at ease.  It was a natural masterpiece amid the wild and rugged Olympic coast.  That’s when I first fell in love with Kalaloch Beach.  My fondness for this special place would only grow over the next couple of days.

What fascinated me most about watching the beautiful sunset on the beach was the company I kept.  A short distance to my left on a long narrow stretch of wet sand stood approximately 200 seagulls.  These small white birds stood absolutely still in a straight line facing the water.  I couldn’t believe it, but it certainly looked like the seagulls were just as captivated by the spectacular sunset as I was.  Then again, judging by the sight before me, I saw no reason why they wouldn’t be enamored by the view.

Then to top it off, and confirm my theory, once the sun fully disappeared from view the seagulls departed in unison.  They left the sand at once and filled the sky, then quickly flew away and out of sight.  I was left wondering if the seagulls come for the show every day and where they go when it’s over.

After the sunset, I returned to my chair beside Joe and watched the sky turn to black.  Several groups of people were spread out across the beach.  There were a few circles of people sitting around small beach bonfires.  We grew very jealous of that idea and decided we would have to try it the next night.

Fog swept over the coastline from the ocean, distorting our view of the outer reaches of the beach.  It made people walking in the distance look like ghosts.  The temperature continued to plummet and our surroundings grew darker by the minute.  We decided it was time to make the return trip, up and over the treacherous driftwood, to our campsite.

There was no question in my mind that we would be back for a pacific sunset on the beach the next two nights.  Our only hope was that it would warm up a bit and we could have a fire. 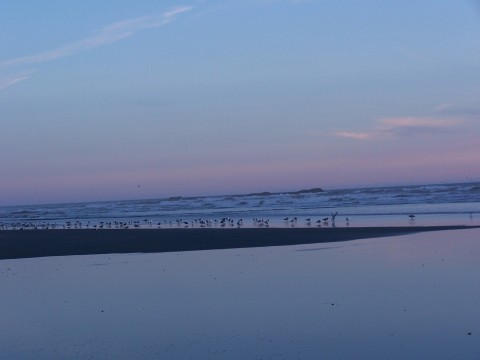 6 thoughts on “The Best Beach Ever”